It’s been a strange, off-again-on-again spring, with some weather extremes. At the end I was wondering who stole our spring, as it turned quite chilly again. Not quite cold enough for frost, but get the cozy old sweatshirt back out sort of weather.

Here are a few outdoor highlights: 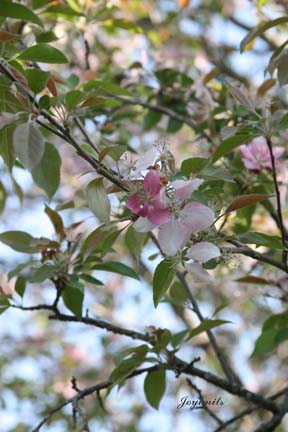 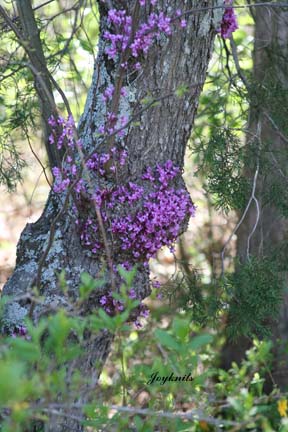 PS. I just added another pattern to my Ravelry store – it’s perfect for a very special occasion!

there are other things growing here too, like the Disco Belle hibiscus 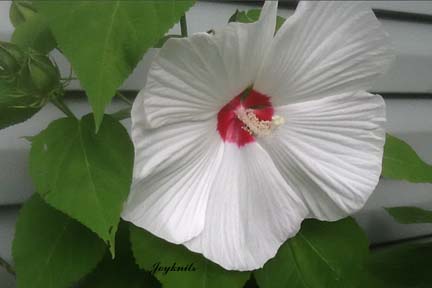 and cucumbers, which are just starting to come in. These are a pickling variety, but they’re also very good to snack on 😉 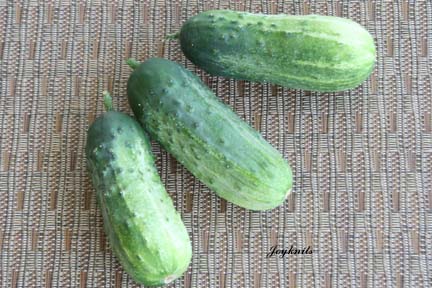 But there are plenty of beans – I’ve already put some in the freezer to enjoy next winter, and I fixed some of the little French fillet beans (Calima) with shallots, diced tomato, toasted pine nuts and fresh herbs (thyme, parsley & basil) the other night – yum! These beans are producing very well and are definitely on my plant-again list.

or at least sort of 😉 This weekend is the 250th anniversary of the founding of our nearest town, and I’ll be KIPing (in costume) at the Courthouse both Saturday and Sunday. I’ve packed a variety of projects – a lace edging, facecloth, sock and a mitten. I’ll try to get some photos.

All the yarns in the basket have been worked up, and they were all lovely. Here are a couple of the yarn doodlings 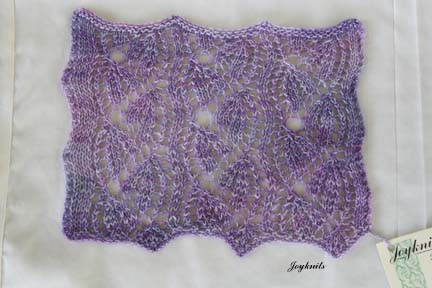 Yesterday I was looking for some straight needles (well-hidden as they so rarely get used!); Look what I found while digging in a box of old knitting stuff – wow!!!

The shaded sweater actually caught my eye first, but the 2nd one is also an Elizabeth Zimmermann design, though in 1960, Woman’s Day obviously wasn’t into giving designers credit. Mom must have ordered the booklet, and also saved the pictures from the magazine. There are more goodies in the box that I need to investigate later.

Found this in the yard this afternoon (right before it was mowed) – there was 1 small clump/plant that was mostly 5-leafed ones, though I never saw one quite like this before.

And this was the first thing I saw when I went out on the deck yesterday morning – big surprise! I’d prefer it stay off the deck, but I’m happy to have it doing rodent patrol in the yard.

Guess I need to quit procrastinating and finish packing!

We’ve had lots of birds and critters in the yard, including this wren, who was exploring below the deck yesterday,

and more of the local wildlife – I’m glad I’ve got a rabbit-proof fence around the veggies!

How many bunnies (trick question)?

and even caterpillars – since they’re Swallowtail caterpillars (actually 5 of them), I just picked up another dill plant 😉

Prairie Sunrise has been spectacular, though the rains have made it a bit droopy. I counted 24 flowers and buds on it. 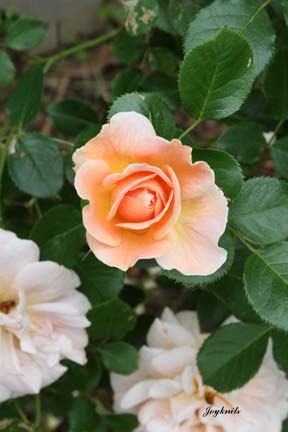 Just a little ways over, the hollyhocks are getting ready to bloom – can’t wait to see what color(s) are there.

This was the sky last evening, and it’s supposed to be more of the same, which makes Toby one unhappy dog, even with his ThunderShirt!

It’s been acting a bit more like May; this evening, I heard the first chuck-will’s-widow of the season, even though I haven’t heard a whip-poor-will yet (if you have cats in the house, click on the sound links and watch the reaction – it was pretty funny here!). The whip-poor-will’s range extends farther north, but we have both here – they’re rarely seen but we hear them a lot.

The Harison’s Yellow rose (heirloom rose) is in bloom, and the whole bush is loaded with buds. The other rose also has lots of buds, but isn’t quite there yet. 🙂

There are mayapples over by the side of the house – I’ve no idea how they got there, but they must like it, as they’re multiplying. I think that may end up as a fern and wildflower area. 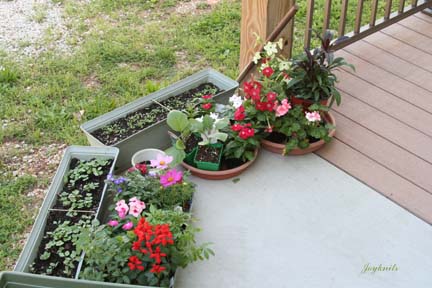 Some plants I picked up yesterday (lots of red for the hummers); several of the vincas, salvias and verbenas are already in planters, most of the others will go in the bed beside the deck, along with marigolds and nasturtiums, which did very well in spite of the hot dry summer last year. The 2 planters have lettuce and radishes in them.

Though the ground isn’t really dry enough to till thoroughly, I did make a start on it today, and it’s good to see progress!

I was actually quite happy to see this guy today – there used to be a larger one that lived under the back porch BC (Before Construction) and terrorized the varmints. I think this one is smaller, but maybe a descendant of the original one 😉

The other day Toby kept barking and barking over by the corner of the fence. I never did figure out what he was upset about, but when I went to look, I spotted these, which made a nice little side dish for lunch:

The big excitement this week has been centered around the bird feeders. In previous years, rose-breasted grosbeaks and orioles have made brief stops in the yard, but never stayed. So far this year, they’ve been hanging around. The grosbeaks seem to like both the sunflower and safflower seeds, and the orioles (at least 2 pair – yay!) started out with the suet cake, which they’re still working on, but have also decided the grape jelly feeder is a good deal.

I finally tried a recipe I found a while back for Spicy Chicken Thighs with Apricots and Olives.

Fortunately I’d saved it in Pepperplate, so I could find it, and it turned out as good as it sounded – I was a bit careful with the heat level and will add a bit more the next time. It’s really easy, as you put the chicken in a bag with the marinade and let it sit for 24 hours, then cook it in the oven, and serve over rice or cous cous – yum!

Toby went to the groomer today, so he’s nice and soft and a bit less furry – when I picked him up, there were drifts of fur out in the reception area that had just rolled under the door from the grooming area 😉 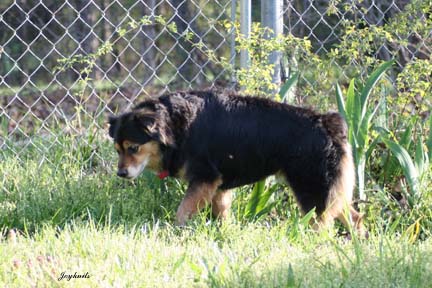 Another bit of spring – the sassafras trees are in bloom.

in this case, can cause problems! Starting way too early this morning with a wake-up call from Toby because it was storming (time for his Thundershirt and Rescue Remedy!), it kept raining most of the day (almost 4″ in the gauge), and a pond that’s nearly overflowing. We’re usually lucky to have a foot or 2 in it!

At times like this, we’re very happy to be 200-300 ft higher than the highway, because the creek running next to it went over the road in at least a couple of places (pictures on Facebook), and it was even worse in a number of areas around the St. Louis region.

While I was over by the pond, I sneaked a peek into the bluebird house, and saw what looked like a blue tail sticking up on the left, but didn’t want to disturb her, so it’s not a very good photo.

Meanwhile things are blooming, and I saw the first hummer of the season this morning, though only briefly.

I tried a recipe from Essential Pepin today; Red Snapper with Leeks, Mushrooms & Shallots – with a few substitutions, that is. The recipe said it was suitable for any firm-fleshed fish and I had a piece of flounder, green onions, dried shiitake mushrooms and 1 red sweet Italian pepper, so I sliced, diced and seasoned a bit, simmered everything but the fish in a cup of white wine, then put the fish on top of the sauce, simmered until the fish was just done, and the recipe’s definitely a keeper! 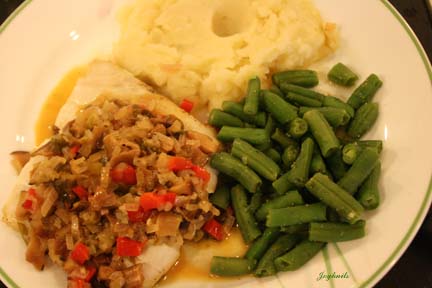 Talk about getting out of one’s comfort zone! Anyone who knows me knows that I don’t crochet very much – my skills there are pretty minimal, but a friend asked for help with his Mom’s treasured afghan. She’s in a nursing home, and the afghan had been sent through the big washer. Unfortunately, some of the yarn in it was wool and didn’t tolerate that at all well. 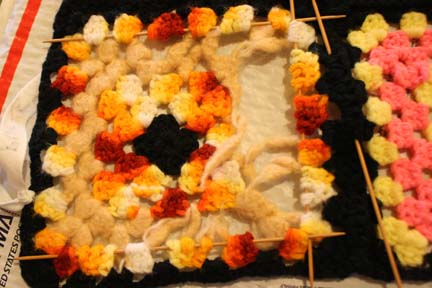 It would be nice if it were possible to insert rows/rounds into crochet like you can with knitting, but as far as I can find out, crochet doesn’t work that way, so I ended up taking the square out, adding 2 rounds with new yarn, then recycling the original yarn for the last 2 rounds. She was very thrifty with her ends, so it wasn’t easy 😉 Hope I don’t need to do it again!

I meant to do a post yesterday, but somehow it just got away from me. I did, however, finish Cat’s Paws & Feathers, which is now on Ravelry. It was really fun to knit, but it sure fought back when it came to getting the color to come out in the photos! 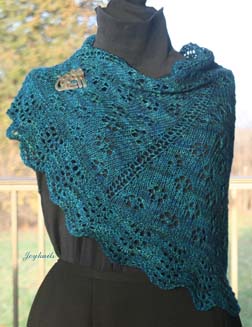 The swatch from the last post is turning into a sweater, and going faster than I expected. The back is done, and this is the first front.

As the sleeves will be somewhere between short and 3/4-length, I’m hoping to have it done fairly soon. I stopped by Hearthstone Knits in St. Louis last weekend, and found the perfect buttons for it too 🙂

We’re still getting a wild mix of weather – after several very warm days and a big thunderstorm the other evening (but not nearly as bad as the 3 tornadoes that went north of us!), we have a frost warning for tonight, but it’s still looking more like spring all the time. The buds are getting bigger on the buckeye, and the hummers usually show up around the time they open. 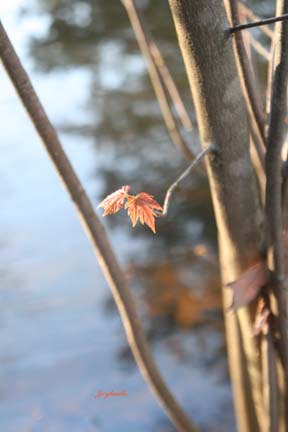