The second half of the lace scarf I started a couple of weeks ago is coming along, but it just underwent an on-the-fly revision. The original plan was to undo the crochet cast on, put the stitches on the needle and knit the 2nd half from there. After working a few rows, I found I simply couldn’t stand the resulting jog in the pattern alignment. Rrrrrip! Plan B is to work the 2nd half almost like the first, then undo the crochet cast ons and bind off the 2 halves together at the center. I’m hoping I’ve left a long enough end for the bind off 😉 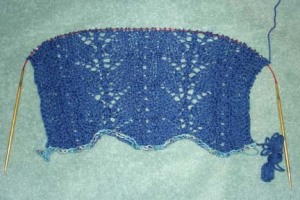 In the latest installment of “what’s in the fridge,” I sautéd a large shallot, sweet red pepper, a few fresh shiitake mushrooms, and broccoli crowns, mixed with some orecchiette pasta, and topped with a little shredded white cheese.

Most of the frozen stuff was gone by this morning, though there was still a ridge where it had been piled up along the road. The pond still had ice on it, with neat reflections in the water on top of the ice. 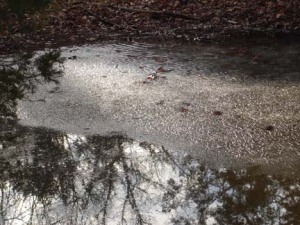 Knitter, designer, tech editor, spinner sharing a home in the Missouri Ozarks with my husband (53 years and counting), 1 dog, 2 cats, and way too much stash!